Which streaming platform is your go-to? Paramount+ has really grabbed the attention of Aussies since hitting the market this year, and competitors might be feeling the pressure. The platform is actually the fastest growing we’ve ever seen with so many Australians jumping on board to subscribe, having only launched in August and already claiming 4% of the market share!

You could say Netflix, Stan and Amazon Prime are the major players in game, but they’ve all seen a decline since Paramount+ came into the picture. Netflix and Stan in particular have both lost about 4% of their market share, and Amazon Prime Video has lost 3% . Disney+ is still growing a solid audience – who else jumped on the subscription to watch The Mandalorian?

Its clear Aussie’s love to stream their sports, with Foxtel’s Kayo, Binge and Foxtel Now reaching an 11% subscribers share and Kayo becoming Australia’s largest sports streaming platform. Let’s be honest, we all love the easy access to AFL, cricket, Supercars and NBA. 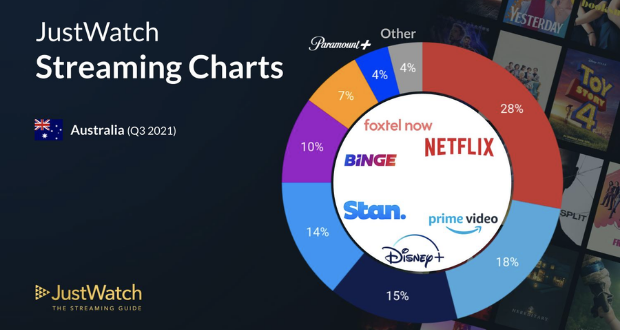 Right now, Netflix is still on top with its 33% share of subscribers (because who doesn’t love a Netflix Original?), but with the way things are going, we really have no idea what Aussies will be streaming in the future.