Remember a couple of years ago when we saw this rather interesting paparazzi photo of Daniel Radcliffe? 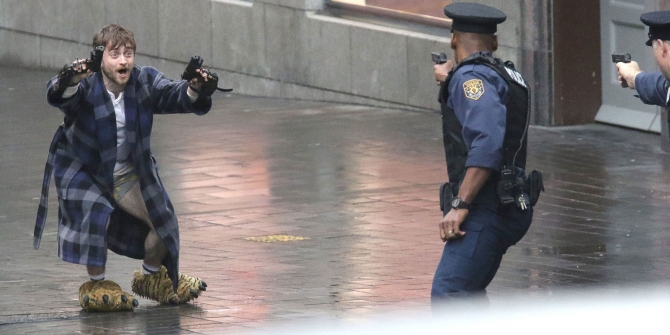 Well, as it turns out, he wasn’t going through some sort of extragenital crisis after playing the boy who lived, he was in fact making a movie in New Zealand. And now we get to see why exactly he was on the streets being arrested by cops while wearing a rope and lion slippers while wealing weapons in Guns Akimbo. Does it answer the questions while also being another entertaining post-Harry Potter movie?

Set in an alternate/ not too distant future, Miles (Radcliffe) is a game developer with very little passion in his life, except for one night when he drunkenly trolls the message board of Skizm, an illegal death-match fight club live-streamed across the internet. The leader of Skizm, Rictor (Ned Dennehy), decides to put Miles in his place by entering him into the gladiatorial match. He is also given an extra layer of punishment by having two handguns crudely attached to his bones with nails. To make matters worst, his opponent is Skizm hall-of-famer, Nix (Adelaide’s own Samara Weaving), a lunatic who will kill anyone and anything in her way. Miles decides to put action into his own hands to fight back against Nix and Skizm, especially when his ex-girlfriend Nova (Natasha Liu Bordizzo) is endangered.

To get this right out of the way, this is not going to be a movie for everyone. If the premise sounds absolutely ridiculous to you (which it IS), and the idea of very crude violence and over the top camera work and editing sounds too much, then you won’t like this. That being said, if you are someone who can get behind a stylish movie like this, then you will most likely have a BLAST. Guns Akimbo unapologetically gives the audience a very goofy and frantic steampunk love-child of Mad Max: Fury Road and Scott Pilgrim vs. The World with lots of cursing, gore, and scene-chewing performances. While the characters and story are very standard and cliche (Despite openly referencing the tropes), the movie runs at a breakneck pace while using the violent world to satirise obsession with social media and violence.

Going back to that image and the initial premise of Guns Akimbo, the movie almost needs to have that insane world-building to make someone with gun hands SOMEWHAT believable. But its clear a lot of creative thought went into the idea of having gun hands as the simple act of using Lefty and Righty gives the main character pain due to a combination of the blowback and the nails in his fingers. Plus there’s a bathroom scene with the guns. That is all. Since finishing Harry Potter, watching Daniel Radcliffe make very specific career choices has been legitimately fascinating. After all, this is the man who said yes to playing a farting corpse in Swiss Army Man. But he manages to bring a grounded and hilarious performance with the rather odd weapons, which works perfectly in conjunction with an unrecognisable Samara Weaving as Nix.

Overall, Guns Akimbo is creatively cartoonish and absolute bonkers in the most fun way possible. The movie achieves exactly what it is aiming to be, especially with a great leading performance from Radcliffe as he makes you believe that he truly has gun hands. If this sounds appealing to you, I can definitely recommend Guns Akimbo, if not, maybe wait for the movie he filmed in Adelaide. Or rewatch the Harry Potter series.

Guns Akimbo is in very select cinemas on March 5th.