Want to be apart of a special event while also donating to an important cause?

This Saturday, you will have the chance to see Avengers: Infinity War and Avengers: Endgame in a back-to-back charity screening with 100% of the profits made going towards the Curing Homesickness campaign.

Every year, there are over one million children being admitted to hospitals all across Australia. As patients, children are in hospital for different periods of time, whether it being one day or one month, which can bring a feeling of homesickness. A recorded 50% of children aged from 5 – 18 years old suffer moderate to severe levels of homesickness while in hospital.

Homesickness comes from missing the simple comforts of home, such as a family pet or the smell of mum’s cooking. Being away from their loved ones while in hospital can cause symptoms like depression and anxiety, coping deficits, and feelings of helplessness.

Curing Homesickness is a recently launched campaign that is focusing on the emotional wellbeing of children in hospitals. The campaign gained some notice from a video documenting a young girl named Ali, who missed her mum’s “Sause” because it reminded her of being home with her family.

Eight hospitals across Australia have joined together to help bring awareness of Curing Homesickness, including the Women’s & Children’s Hospital Foundation here in Adelaide.

The Walt Disney Company Australia and Marvel Studios and have partnered up with Curing Homesickness to help kids get back home quicker with a charity screening of the epic two-parter of Avengers: Infinity War & Endgame for one day only.

The profits made from the screening will help grow funds for important clinical needs such as investing in research, the latest equipment and the amazing health professionals who will deliver the care that children need.

“Disney ANZ is proud to be involved and support the staff, families, and children involved in such an important, inspirational initiative as the Curing Homesickness campaign,” says Kylie Watson-Wheeler, the Managing Director of The Walt Disney Company Australia and New Zealand.

“Disney’s long-standing commitment to deliver comfort and inspiration to families with children facing serious illness dates back to Walt Disney himself, who would visit with children in hospitals often accompanied by Disney characters and animators.”

The Avengers double bill screening will be held at Event Cinemas Marion on Saturday the 3rd of August from 10 am. Tickets are $20 and are available here.

Alternatively, you can read more about the Curing Homesickness campaign and donate here. 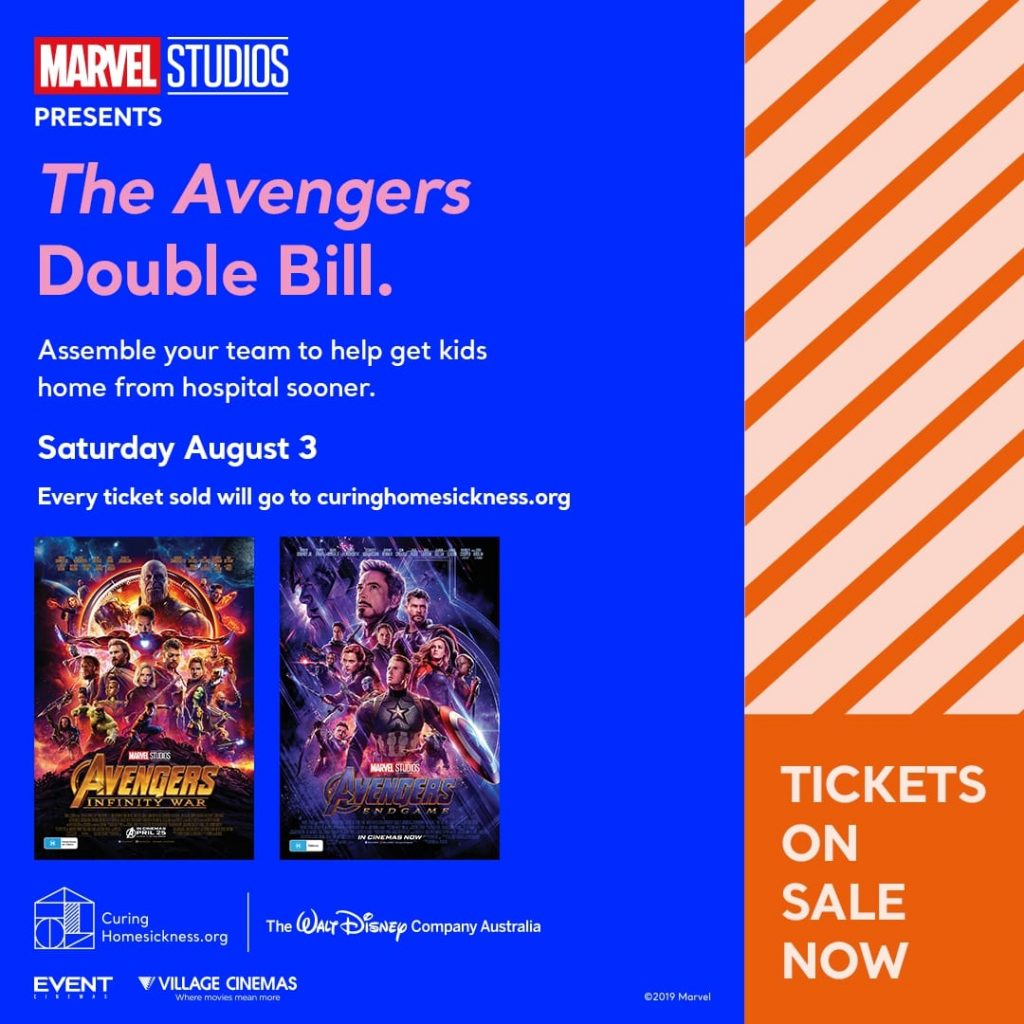